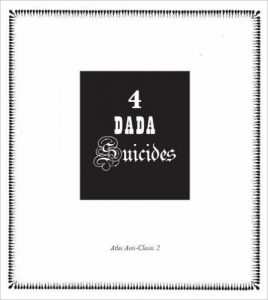 It is said of Cravan, the self-proclaimed poet and boxer, that he “put all of his genius into his life.” All four of the writers here were, in a way, performance artists, with their art being their lives?complete with dramatic finale. Rigaut shot himself in the heart. Vache overdosed on opium, and both Cravan and Torma vanished without a trace. Which isn’t to say their lives didn’t influence Dada, the short-lived, professionally disruptive approach or the Surrealists who followed. None of the writers here was prolific: a result, no doubt, of short lives, wartime interruptions, the time and energy needed create personae and the difficulty involved in writing to suit a philosophy devoted to destroying art and literature. By and large, the choppy prose reveals the preoccupation with word games, undermining poetic norms and epater le bourgeois and is most valuable for the window it gives on the movement and its anti-art, freedom-at-all-costs inspiration. The works show a quirky, egocentric, tongue-in-cheek style, the kind that, by the sheer force of its outrage, created a new way of looking at the world and defined a literary era.