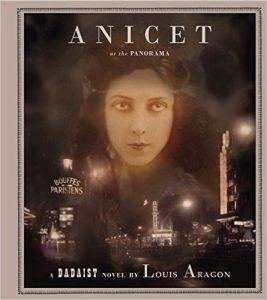 This novel, much of it written amidst the horror of the trenches when Louis Aragon (1897–1982) was a medical orderly during the First World War, demonstrates the chasm that separates the works of the artists and writers of what would become Dadaism and those, say, of the English War poets. In a world of moral destitution beyond any rational forbearance, what can remain? How can one write at all, let alone something as absurd as a novel? Anicet or the Panorama is both a roman à clef (Aragon’s friends, including André Breton, are recognizable), and a novel of the total liquidation of a culture that had allowed this to come to pass: even literary heroes must be confronted and superseded. As fast-paced, funny and surprising as a Hollywood silent movie, its narrative of fabulous crimes and scandals sweeps through a panorama of Paris society as its protagonist Anicet becomes subordinated to the mysterious Mire, a woman who is the incarnation of “modern Beauty.” Anicet is seduced into a life of crime, which he accepts with nonchalance and an ironic integrity that he maintains to the bitter end of his journey of self-immolation.
Aragon’s precisely crafted, sardonic prose reveals a world that is no more than a tragic puppet show. This furious tempest of a book launched Aragon’s career and is one the cornerstones of the Paris Dada movement.